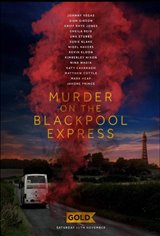 Murder on the Blackpool Express (BritBox)

In this feature-length comedy mystery that pays homage to Murder on the Orient Express, a murder-mystery writer named David Van Der Clane takes his fans on a coach tour of the locations from his famous book.

Things go awry for David (Griff Rhys Jones) when passengers on the coach begin to die mysteriously, one by one. The circumstances are very suspicious and David, along with the coach tour operator Gemma (Sian Gibson) and driver Terry (Johnny Vegas) must catch the killer themselves when the police are no help. They must also confront the scary truth that David's stories are coming to life, and the deaths are not coincidence but instead cold-blooded murder.