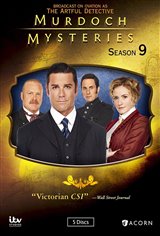 Set in Victorian-era Toronto, Detective William Murdoch (Yannick Bisson) is a man of science, who is far ahead of his colleagues. He goes about solving crimes in a scientific way and is greatly admired by others, including Constable Crabtree (Jonny Harris), who works hard to impress the detective. Murdoch also works alongside Dr. Julia Ogden (Hélène Joy), with whom he has a romantic relationship, and often has to appease his tough-as-nails boss, Inspector Brackenreid (Thomas Craig), who prefers to do things the old-fashioned way.