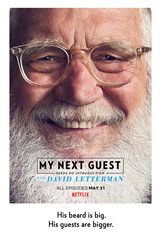 My Next Guest Needs No Introduction with David Letterman (Netflix)

Talk show host David Letterman teams up with global figures for in-depth interviews. He speaks to entertainment figures such as George Clooney, Ellen DeGeneres, Robert Downey Jr. and Tiffany Haddish about a number of topics that have been off the table for other interviewers, but his charm allows his guests to open up to him.

He also talks to political leaders such as Malala Yousafzai and Barack Obama.

During each interview, he also goes on location. For Ellen DeGeneres, he visits her studio on the Warner Bros. lot and meets with her crew members. He travels to Oxford in England with Malala Yousafzai to see where she goes to school and meets some of her classmates.

He gardens with Tiffany Haddish at her home and feeds farm animals with Robert Downey Jr. at his estate. In his behind-the-scenes segment for George Clooney, Dave visits George's parents, Nick and Nina, at their home in Augusta, Kentucky and meets a young refugee whom George, his wife and his parents have welcomed to the USA so he can further his education while living in a safe environment.