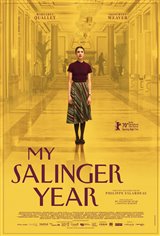 In the late 1990s, aspiring young writer Joanna Rakoff (Margaret Qualley) leaves college behind in California and moves to New York City, where she lands a job at a literary agency whose clients include reclusive author J.D. Salinger.

Her eccentric, old-fashioned boss Margaret (Sigourney Weaver), who is suspicious of computers, gives Joanna tasks such as transcribing letters using a typewriter and answering Salinger’s voluminous fan mail with a form letter. As Joanna struggles to find meaning in her job, she also realizes that she can't give up on her dreams.

Based on Joanna Rakoff's memoir, My Salinger Year, published in 2014.

Canadian Connection: Filmed in Montreal. Director Philippe Falardeau and several of the supporting actors are Canadian.;