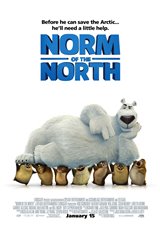 Norm of the North

Norm (Rob Schneider) is an Arctic polar bear who doesn’t eat meat or hunt like other bears. And unlike his Arctic cohabitants — he’s upset to find that there’s no more room for human tourists in the Arctic. Norm simply doesn’t fit in.

But when he’s forced to flee his home after it starts melting, he begins to find his place in life when he and his three lemming friends travel to New York City to stop a developer from building luxury condominiums in the Arctic.