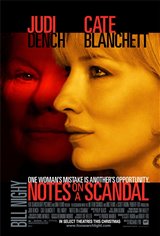 Notes on a Scandal

When Sheba Hart (Cate Blanchett) joins St. George's as the new art teacher, Barbara Covett (Judi Dench) senses a kindred spirit. But Barbara is not the only one drawn to her. Sheba begins an illicit affair and Barbara becomes the keeper of her secret. Based on the novel by Zoe Heller.