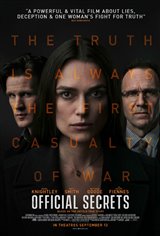 In 2003, British translator Katharine Gun (Keira Knightley), who works at Government Communications Headquarters, is irate when she sees Prime Minister Tony Blair on the news, asking that the British to get involved in the Iraq War.

When she receives a memo from the United States' National Security Agency requesting British intelligence to spy on five UN Security Council members in order to get their support for the war, she decides her loyalty isn't to either the U.K. or U.S. governments, but to the civilians living in Iraq. When she leaks the memo in an act of defiance, she's charged with treason under the Official Secrets Act.

Based on the book The Spy Who Tried to Stop a War: Katharine Gun and the Secret Plot to Sanction the Iraq Invasion by Marcia Mitchell and Thomas Mitchell.