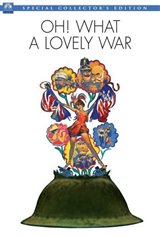 Oh! What a Lovely War

Oh! What a Lovely War is an every-man-for-himself adaptation of Charles Chilton's 1963 play, as staged in London by Joan Littlewood. The tragedy of World War I is redefined in bawdy music-hall terms, beginning with a verbal free-for-all involving the Crowned Heads of Europe.

The war is presented as the new attraction at the Brighton Amusement Pier, complete with syrupy cheer-up songs, shooting galleries, free prizes and a scoreboard toting up the dead. Throughout the proceedings, the camera concentrates on a middle-class family, whose five sons end up as cannon fodder.

The final image is a veddy proper British picnic on a graveyard. Of the many fleeting satiric images parading past the camera, one of the most indelible is the sight of several generals playing leapfrog as the world all around them goes to hell in a handbasket.

The whole affair was supervised by Richard Attenborough, making his directorial debut (a question: why was he up to the challenge of this musical extravaganza, yet seemed helpless in the face of 1985's A Chorus Line?).