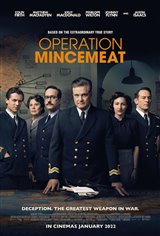 During WWII, the allied forces prepare their invasion of Sicily, planning to strike its southern shore. When they learn that the Nazis are aware of their operation, two intelligence officers, Ewen Montagu (Colin Firth) and Charles Cholmondeley (Matthew Macfadyen), devise a plan to humiliate Hitler and deceive the Nazi forces by using a corpse carrying fake documents, suggesting that the ally forces' real target is Greece.

With Spain not allowing German forces anywhere near the found corpse, Ewen and Charles must think on their toes in order to have a successful invasion and turn the tides of the war.