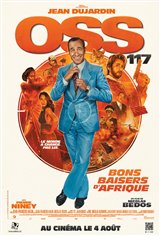 OSS 117: From Africa With Love

Having escaped from a Soviet jail in Afghanistan, French secret agent Hubert Bonisseur de la Bath, who became famous under the number OSS 117, is relegated to computer work by his superior. The latter has placed all his hope in the new recruit Serge, alias OSS 1001. But when Serge goes missing in Africa, where his mission was to promote the reelection of a dictator friend of the French government, Hubert is sent as backup. He manages to find Serge, who was trying to infiltrate a rebel group, and teams up with him. To the chagrin of the veteran secret agent, his young colleague proves to be more modern in his methods, and above all, more effective in bed with women.