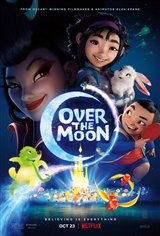 Over the Moon (Netflix)

When Fei Fei (voice of Cathy Ang) was a young girl, her now-deceased mother told her the story of Chang'e, a moon goddess of Chinese mythology who is waiting on the moon for her one and only true love.

Her friends and family think it's just a silly myth, so the 13-year-old girl, who's a STEM-proficient student, decides to build a rocketship herself so she can find Chang'e and prove the story is true.