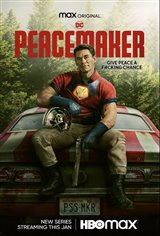 Following the events of The Suicide Squad, Peacemaker (John Cena), a born killer with expertise on every weapon known to humankind, is supposed to be in prison. He's approached by Clemson Murn (Chukwudi Iwuji), who offers him an opportunity to avoid jail time by working under him and forming a team to kill bad people.

Tasked with killing Senator Royland Goff, Peacemaker teams up with Harcourt (Jennifer Holland), their field handler; John Economos (Steve Agee), head of tech and tactics; Vigilante (Freddie Stroma) and Adebayo (Danielle Brooks), their new recruit. The unlikely group of killers do their best to come together as a team, as Peacemaker also tries to come to terms with his estranged father.