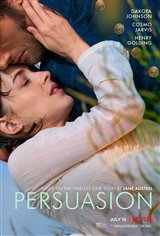 Anne Elliot (Dakota Johnson) finds herself reconnecting with her past love, Frederick Wentworth (Cosmo Jarvis). Anne thought that her chance for a happily ever after was gone after she was persuaded by her family to reject the naval officer's proposal, because of his humble origins.

Anne still has unresolved feelings towards him, and now 27, she must choose between helping her family by marrying the wealthy William Elliot (Henry Golding) or following her heart to a second chance with the handsome Frederick.

Based on the classic novel by Jane Austen.