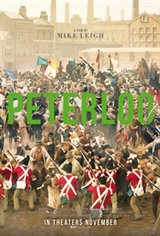 In 1819, when a peaceful crowd of over 60,000 citizens gather in Manchester, England to demand democratic reform and protest against rising poverty, government-backed forces charge into them, causing one of the bloodiest episodes in British history.

Many protesters were killed and thousands more were badly injured, causing a public outcry. It also played a key role in the formation of The Guardian newspaper.