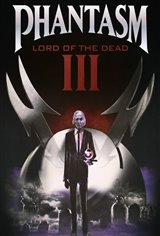 Phantasm III: Lord of the Dead

The evil alien known as the Tall Man (Angus Scrimm) has infiltrated the minds of Mike (A. Michael Baldwin) and Reggie (Reggie Bannister). The two friends embark on a journey to find and kill him, only to discover that he has destroyed town after town, leaving zombies in place of the living.

Along the way, Mike and Reggie meet several characters who share their goal, including a murderous boy named Tim (Kevin Connors) and two young women who are excellent fighters.