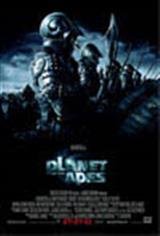 Planet of the Apes

In the year 2029, astronaut Leo Davidson (Wahlberg) crash lands on a strange, savage planet ruled by apes who have enslaved the human race.

Led by the brutal General Thade (Roth), the apes seek to destroy Davidson, whose presence upsets their order and theatens to inspire a human rebellion.

Aided by a sympathetic chimpanzee human-rights activist (Bonham-Carter) and a small group of human rebels, Davidson races through a barren landscape called The Forbidden Zone, where an ancient temple holds the key to mankind's salvation.

Based on Pierre Boulle's acclaimed science fiction novel of the same name.