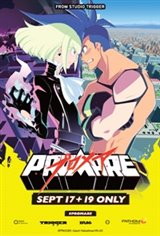 The first feature film from the acclaimed Studio TRIGGER and director Hiroyuki Imaishi, Promare is an explosive showdown between Burning Rescue and the destructive Mad Burnish in an electrifying, explosively colorful action-adventure. Thirty years has passed since the Burnish destroyed half of the world with fire. When a new group of mutants appears, the epic battle between Galo Thymos, a member of the anti-Burnish rescue team "Burning Rescue," and Lio Fotia, the leader of "Mad Burnish" begins.