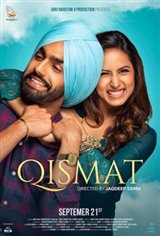 Qismat is a story of a young lad’s journey to find true love. Shiv, after being humiliated in his village for being a failure, moves to Chandigarh to live his life to the fullest. There he meets Bani and tries to woo her. As life takes its turns, Shiv and Bani part ways.

After some time they cross each other’s path but Bani is engaged now and Shiv faces failure in love yet again. He gets involved with another girl in an arranged scenario. Bani’s father somehow finds Shiv and tells him about Bani’s deteriorating health. Shiv tries helping her get better but she finds out about his fiancée and sends him back.

Will Shiv and Bani unite at the end or will destiny prevail over love?