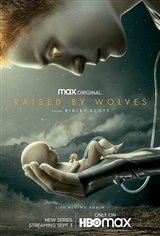 After Earth is destroyed, two androids move to a new world to start over. It's the only planet where humans can survive and the two of them are raising children to become the future of humanity. They are raising the children with strict rules in hopes of never repeating the mistakes that destroyed Earth.

But their plan is put in jeopardy when other humans, who believe having androids raise humans is a sin, come to the new world to rescue the children. These new humans believe the androids are dangerous, leading the children to question their actions back on Earth. While the humans want to destroy them, all the androids want to do is keep the children safe.