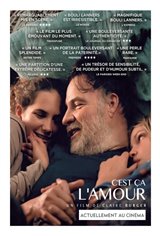 Mario, an man in his fifties, sees his world collapse the day his wife leaves him, abandoning him with their two daughters. Frida, 14, criticizes her mother's departure and, as she experiences her first feelings of love, wonders about her sexual orientation. Niki, 17, dreams of leaving home and moving away. Mario, for his part, tries the best he can to get closer to these two girls he barely knows, while still secretly hoping for his wife’s return.