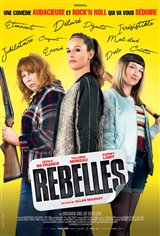 Sandra, a former Miss Nord-Pas-de-Calais, returns broke and unemployed from the Côte d'Azur to her mother, who manages a campsite in Boulogne-sur-Mer. She unenthusiastically begin to work at the local cannery, where her grand airs annoy the other employees. Used to bedding his workers, foreman Jean-Mi tries to rape the newcomer in the locker room. But Sandra manages to dodge the assault by radical means, which causes his death. Rushing to the scene, two colleagues, Nadine and Marilyn, help her dispose of the body in an original way. As for the bag filled with money that the victim was lugging around, the three women decide to share the contents, promising not to use any of it for a few months. But a lack of discretion on the part of Marilyn arouses the suspicion of Simon, a small local gangster in search of the loot, which was promised to Belgian drug traffickers.