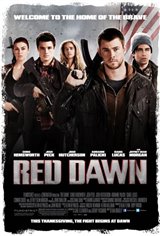 When North Korea invades the United States, a group of young men and women from a small town arm themselves and flee into the wilderness.

When they return to town a few weeks later, they find themselves behind enemy lines in "Occupied America." Most of their family members are dead. They launch a resistance movement, calling themselves Wolverines after their school mascot. But every time they attack on the invaders, the North Korean soldiers execute civilians in retaliation.

With the help of a downed United States Air Force F-15 pilot, the Wolverines organize raids on the North Koreans, who begin to consider them a serious threat.

The film, which is a remake of the 1984 film by the same name, was kind of a reunion of sorts for Chris Hemsworth and Isabel Lucas, who once co-starred in the Australian soap opera Home and Away and even dated for a short period.