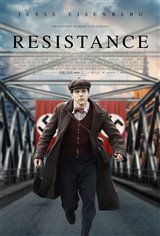 Before he was famous, legendary French actor and mime artist Marcel Marceau was known as Marcel Mangel (Jesse Eisenberg). As a young man, Marceau grew up in Nazi-occupied Europe during WWII. His father was a butcher, but with no desire to carry on the family business, Marceau performed his Charlie Chaplin routine in cabaret clubs.

His plan for a career is put on hold when he joins the French Resistance. Working alongside others with the same ideals, Marceau helps save the lives of thousands of children by secretly getting them to safety across the border under the noses of the Nazis. Using his comedy and acting skills, Marceau helps the children learn how to survive in these horrible times.

Based on the inspiring true story of Marcel Marceau.