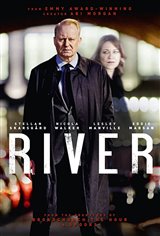 Detective Inspector John River (Stellan Skarsgård ) is haunted by visions of his colleague, Detective Sergeant Jackie 'Stevie' Stevenson (Nicola Walker), who was recently murdered. He searches for her killer, although he's officially excluded from the case because of his proximity to the events. At the same time, he's working on a case of a missing teenage girl.

River discovers that Stevie had a second mobile phone, and that she'd been a passenger in a car driven by her killer. He also learns that Stevie made a call on the night of her death from the phone to Detective Chief Inspector Chrissie Read's (Lesley Manville) husband, Tom Read (Michael Maloney).

As River uncovers major secrets about Stevie's private life, he resolves to find her killer, despite knowing that if he's successful, he will lose his visions of her forever.