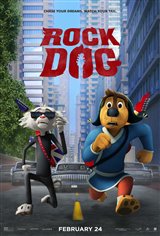 The life of Tibetan Mastiff Bodi (Luke Wilson) on Snow Mountain changes when a radio falls from a passing airplane into his paws. Although his father Khampa (J.K. Simmons), who’s also the Mastiff leader, forbids music from the mountain, Bodi sets off from home to fulfill his dream of becoming a musician, not knowing what series of completely unexpected events await him. To become the rock ‘n’ roll star he’s always wanted to be, he heads for the big city and tracks down musician Angus Scattergood (Eddie Izzard).

If he’s successful in putting a band together and releasing a song with Angus, as well as overthrowing the vicious wolves who’ve hatched a plan to take over Snow Mountain, Bodi will be a hero and an undeniable Rock Dog.