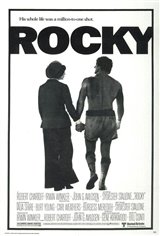 Aspiring boxer Rocky Balboa (Sylvester Stallone) lives in a small apartment in Philadelphia, Pennsylvania and earns a living by collecting debts for a loan shark. His boss, Gazzo (Joe Spinell), does not believe Rocky has the guts to beat up the guys who owe money but Rocky’s ex-trainer Mickey (Burgess Meredith) believes Rocky could have made it to the top of the boxing world if he'd worked for it.

When heavyweight champion Apollo Creed (Carl Weathers) comes to Philadelphia, his agents want to set up a publicity stunt to give an aspiring boxer the chance to become a "somebody." When Rocky is chosen, he goes back to train with Mickey for the fight of his life. Although it is already decided that Apollo will win, Rocky wants to prove everyone wrong.