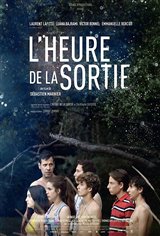 French teacher Pierre Hoffman gets a position at an upscale high school where his predecessor committed suicide in front of his class of gifted students by flinging himself out of a window. Pierre discovers that although the students appear to be shell-shocked by what they witnessed, they also display an intellectual precocity and contemptuous coldness, which unnerves him. As things get creepier and creepier – Pierre begins to receive strange calls from an unknown number — he decides to spy on his students to find out what’s going on.