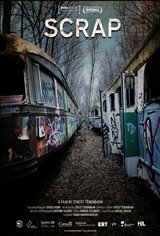 Must a disposable society throw out its memories along with its unwanted possessions?

Director Stacey Tenenbaum tackles this question in her globe-trotting documentary SCRAP which takes place in metal graveyards where, “things like planes and ships and t rains and trolleys all go to die.”

But the stories she uncovers don’t necessarily end there. In Bangkok, Thailand, Fah Boonsoong lives with her family of seven adults and eight children in the fuselage of a scrapped jumbo jet, paying bills with the money tourists give them for taking pictures of the discarded planes she guards. In Spain, architect Tchely Hyung-Chul Shin oversees the dismantling of a cargo ship that will be used to build a modernist church in Seoul. South Dakota rancher and artist John Lopez makes stunning life- sculptures of bison, tigers and other wildlife, from machine parts and found objects, while Tony Inglis restores discarded red phone booths into pricey objets d’art. Meanwhile, streetcar collector Ed Metka’s vintage streetcars are being sold to cities like Kenosha, Wisconsin that has 5 cars transporting tourists along their scenic lake route.

Along the way, SCRAP stops to consider our relationship to our discarded past. Destinations like Dean Lewis’s Old Car City USA in White, Georgia, “the world’s oldest junkyard,” has 90 years of combustion engine conveyances slowly being reclaimed by the Earth. And the disposable culture we’ve created has spawned eWaste recycling industries in places like Delhi, India, where millions of cell phones that were all once in someone’s pockets are scrapped.