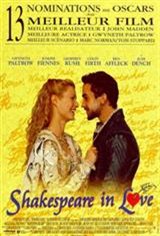 In 1590s London, amid the great heyday of Elizabethan entertainment, two rival theaters — The Curtain, owned by Richard Burbage and The Rose owned by Philip Henslowe — competed passionately for the same audience to fill their playhouses. Under pressure to satisfy the overwhelming demand for new works, a rising young writer by the name of Will Shakespeare penned his love-inspired play — Romeo and Juliet. This twisting, turning, fiery romance both on stage and off will break the hearts and inspire the souls of lovers around the world for centuries to come.

But how, in a time of plagues and monarchs, did this often comical, upstart, struggling scribe come to express such timeless passion in perfectly lifelike story and words? Could it have been that Shakespeare himself was madly in love?