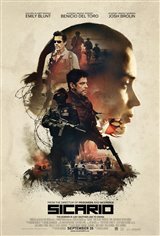 FBI Agent Kate Macy (Emily Blunt) is on assignment to find kidnapped civilians when her team enters a house and finds it filled with dozens of dead bodies. A Mexican drug lord is responsible for the carnage and Kate is invited to join a drug force team to take the drug lord and his cronies down.

She accepts the offer and joins two members of a government task force (Benicio Del Toro, Josh Brolin) on their mission, but soon finds herself in over her head when she gets a first-hand view into the violent and dangerous world of international drug trafficking.