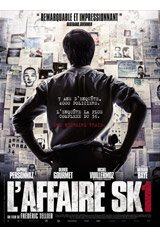 Paris, 1991. Franck Magne, a young police inspector, joins the crime squad at 36 Quai des Goldsmiths. The team he’s joining has been investigating the rape and murder of Pascale Escarfail, a 19-year-old student, for several months. In January 1994, another girl is discovered in an underground car park east of Paris, murdered using the same modus operandi. Although all the clues lead to a dead end, Franck and his team persevere.

A few months later, just after the police officer becomes the father of a little girl, another murder occurs. As the list of victims grows, the crime squad, baffled by their inability to solve the crimes, is divided into opposing teams. Franck’s desperation to solve the investigation is equalled only by the stubbornness of lawyer Frederique Pons, who agrees to defend repeat rapist Guy Georges, who is suspected of the murders.