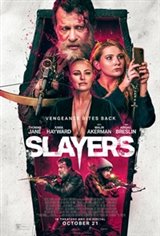 Vampire slayer Elliot Jones made it his life's mission to take revenge on the bloodsuckers who killed his teenage daughter. After years of tracking them, he's finally reached their secret and hidden base.

However, to get to them, he'll need help from a motley crew of social media superstars who've been invited to party at a compound that's also a lair for ancient vampires.