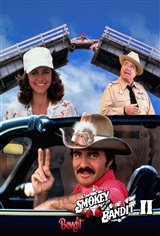 Smokey and the Bandit II

Folk hero the Bandit has fallen on bad times but comes to life when he is hired to help transport a pregnant elephant to a Republican convention in Dallas. Arch-enemy Sheriff Buford T. Justice catches wind of the deal and resolves to spoil the Bandit's comeback.