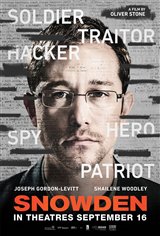 This politically-charged drama reveals the story of American Edward Snowden (Joseph Gordon-Levitt), the former CIA employee and NSA contractor who leaked thousands of classified documents to the press. What he revealed was that the U.S. government had been spying on its citizens to a greater extent than most people knew, including taping into their cell phones.

After deciding to expose the surveillance activities, Edward fled the country to seek asylum elsewhere, leaving his longtime girlfriend Lindsay Mills (Shailene Woodley) behind. His actions cost him his American passport and he had to go hide in Russia. Edward's scandal rocked the world and shocked Americans. He became the most wanted man in the world — considered a hero by some, and a traitor by others.