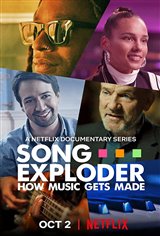 Based on the podcast of the same name, each episode of Song Exploder features some of the world's greatest musicians as they reveal how they brought one of their songs to life. Featured artists include Tony Award-winning composer, lyricist, and actor Lin-Manuel Miranda tells of the creation of “Wait for It” from the musical phenomenon “Hamilton”; 15-time Grammy Award-winning artist, songwriter, and producer Alicia Keys breaks down “3 Hour Drive” from her 2020 album, ALICIA; Pulitzer Prize, Grammy, Emmy, and Rock & Roll Hall of Famers R.E.M. open up about the influences behind the life-changing track “Losing My Religion”; and Grammy-nominated singer, songwriter, and producer Ty Dolla $ign discusses the inspiration behind “LA."