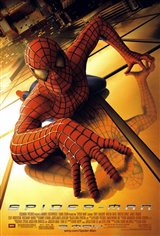 Orphaned at an early age, Peter Parker (Maguire) lives in Queens, New York with his beloved Aunt May (Harris) and Uncle Ben (Robertson). Peter leads the life of a normal student, working as a photographer at the school paper, pining after the beautiful Mary Jane Watson (Dunst) and hanging out with buddy Harry Osborn (Franco).

On a school trip, during which Peter and his classmates are given a science demonstration on arachnids, Peter is bitten by a genetically-altered spider. Soon after, he discovers that he has unusual powers: he is endowed with the strength and agility of a spider along with a keen, ESP-like "spider-sense."

Peter first uses his powers to make money, but in the face of a tragedy that hits close to home, he vows to dedicate his life to fighting crime, taking to heart the words of his beloved Uncle Ben: "With great power comes great responsibility."

Meanwhile, megalomaniacal businessman Norman Osborn (Dafoe), Harry's father, is undergoing some changes of his own. An experimental formula has gone awry, increasing his intelligence and strength but also driving him insane. He is now the Green Goblin, Spider-Man's arch-enemy, who will put young Peter Parker's vow to fight crime and help innocent people to the ultimate test.

Based on the Marvel Comic Book by Stan Lee and Steve Ditko.