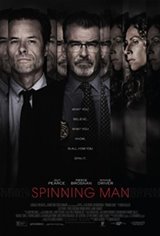 Evan Birch (Guy Pearce) is a family man and esteemed professor at a distinguished college, where his good looks and charm have made his philosophy class very popular. When a female student named Joyce Bonner (Odeya Rush) goes missing in the woods and a man in a grey Volvo was seen just before she disappeared, Evan, who drives a grey Volvo, becomes a suspect.

On the day Joyce disappeared, he was scheduled to pick his daughter Zelda up from her last day of camp, but was 40 minutes late. When strands of Joyce's hair are found in his car and Zelda comes across Joyce's lip gloss, even Evan's wife, Ellen (Minnie Driver) begins to doubt him. Gruff police Detective Malloy (Pierce Brosnan) brings Evan in for questioning in the matter, not knowing if he's searching for a kidnapper or a murderer.