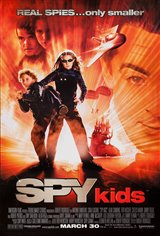 The worlds best secret agents (Bandaras and Gugino) are ordered to track down and defeat each other. But instead of destroying each other, they take each other out... to dinner. Soon married, the two decide to retire from spy life and have two children, Carmen and Juni.