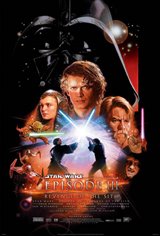 The final catastrophic battles of the Clone Wars are taking place galaxy wide -- including one in the skies above the city-planet Coruscant, seat of the crumbling Republic and also home to the Jedi Knights. Chancellor Palpatine has been taken hostage by the nefarious General Grievous, leader of the droid army -- the mechanized battle troops of the Separatist Alliance.

Obi-Wan Kenobi (Ewan McGregor) and Anakin Skywalker (Hayden Christensen) take on a desperate rescue effort, facing long odds to free Palpatine and destroy Grievous. It's a daring mission, and Jedi Knight Skywalker will be forced to make a fateful decision. Faced with a choice between losing the one he loves or giving up his soul to gain the power to save her, Anakin will fall prey to the seductive temptations of the dark side of the Force.