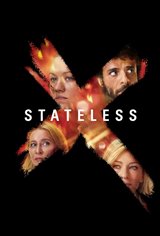 Four strangers — Sofie Werner (Yvonne Strahovski), a brave refugee, a driven bureaucrat and a struggling dad — are imprisoned at an Australian immigration detention center, where they have no idea of why they wound up there.

Sofie's sister Margot prints out Missing flyers and searches ceaselessly for her, but runs into dead ends everywhere she turns.

The prisoners are treated as if they're less than human by the guards, who beat them brutally, even when they've done nothing wrong.