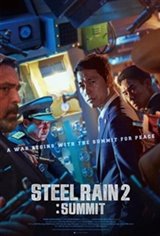 Leaders of South Korea, North Korea, and the U.S. hold a summit in Wonsan, North Korea to discuss North Korea's nuclear issue and peace in the Korean Peninsula. Interrupted by some North Korean hardliners who have raised a coup, the leaders of the three countries are abducted and taken away on a North Korean submarine.

As the hardliners, the U.S., Japan, and China each set up their own plans for war, how will President HAN of South Korea, who is trapped inside a submarine, overcome this crisis?