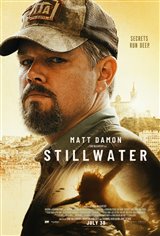 Bill Baker (Matt Damon) is an American oil-rig roughneck from Oklahoma who travels to Marseille to visit his estranged daughter Allison (Abigail Breslin), who is serving prison time for the murder of her college roommate, a crime she claims she did not commit.

When Allison says she has new evidence, Bill decides to stay in France and builds a new life for himself as he makes it his personal mission to exonerate his daughter, despite the language barrier, cultural differences, and a complicated legal system.