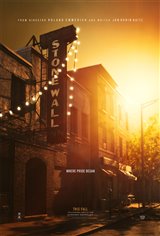 Danny Winters (Jeremy Irvine), a homeless and destitute young man in Greenwich Village, befriends a group of street kids who introduce him to the local watering hole, The Stonewall Inn, a shady, mafia-run club.

As Danny and his friends experience discrimination, endure atrocities and are repeatedly harassed by the police, the entire community of young gays, lesbians and drag queens who populate Stonewall erupts in a storm of anger, igniting a riot.