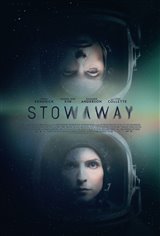 Millions of miles from home after a successful launch, the talented three person crew of MTS42, consisting of Dr. Zoe Levenson (Anna Kendrick), David Kim (Daniel Dae Kim), and Marina Barnett (Toni Collette), the commander of the ship, begin their two year mission to bring life to Mars. However, things get complicated for them when they find launch support engineer, Michael Adams (Shamier Anderson), on board by accident.

With only enough fuel for one trip, and carrying enough supplies and oxygen to support only three people, Michael must mentally prepare for what is to come, as his accidental arrival now jeopardizes the lives of everyone on board the MTS42. To make matters worse, the crew find that the ship's life support systems have been permanently damaged, further limiting their oxygen, and cutting down their time in space down to 20 days before they all suffocate. But with survival comes sacrifice, as their lives and life's work are now on the line, leaving the crew to face an impossible choice.