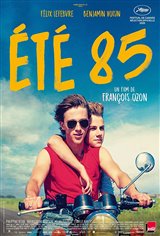 Alexis (Félix Lefebvre) is a working-class teenager who has to decide whether to join the workforce or continue his studies in literature. While out sailing, he caps during a storm and is saved by an 18-year-old stranger named David (Benjamin Voisin).

David takes Alexis to his home, where they meet David’s forceful, charismatic mother (Valeria Bruni-Tedeschi). David takes the helm of this new friendship and budding romance, and is soon showering Alexis with attention and gifts. He even gives Alexis a summer job at his mother’s nautical store, which he took over after his father’s recent death.

Their summer fling gives way to a dangerous obsession and David’s fixation on Alexis turns to cruelty as he reveals a sinister side to his personality.