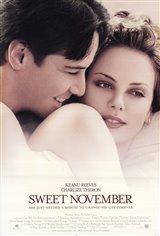 A self-absorbed, extremely driven advertising executive, Nelson Moss (Reeves), meets Sara Deever (Theron) who is his exact opposite. Through her unconventional life she cares for all, humans and animals alike. At the same time she is driven by a set of circumstances very important to her.

After meeting Nelson, Sara decides to make him her project for November. Through her interaction with him she hopes to lead him to discover the importance of life again.