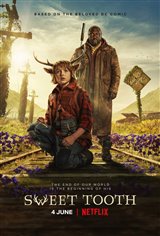 A little half-human and half-deer boy named Gus (Christian Convery) is born during the worst pandemic the world has ever seen. Survivors of the pandemic believe that the hybrid children may be responsible for causing the virus, although some people believe they were caused by the virus.

Gus' father (Will Forte) takes him to a remote, fenced-off area of Yellowstone Park to live, far away from people that might harm him. As Gus grows, his father teaches him how to survive, but when strangers come, life changes for Gus and he has to depend on a gruff protector named Jepperd (Nonso Anozie).

Based on the DC comic book series by Jeff Lemire.

Canadian Connection: Lead actors Christian Convery and Aliza Vellani are both from Vancouver. Jeff Lemire, who created the comic books the show is based on is from Ontario.;