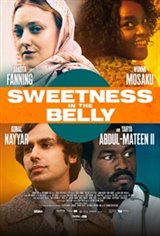 Sweetness in the Belly

Orphaned in Africa as a child, Lilly escapes to England as a refugee, fleeing civil war in Ethiopia. Lost in this cold new world, Lilly embraces the immigrant community in London, attempting to reunite people with their scattered families.

But as her friend Amina (Mosaku) discovers, Lilly's mission isn't purely selfless: a passionate lost love affair is revealed between Lilly and Aziz (Abdul-Mateen), a revolutionary and a doctor. With the potential for a new romance with shy doctor Robin (Nayyar), can Lilly let go of the past?