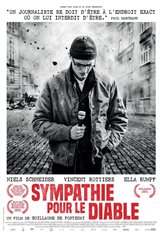 Sympathy for the Devil

Sarajevo, November 1992. For seven months, Serbian Armed Forces have been relentlessly pounding the capital of the former Yugoslavia. In the center of the besieged city, an unoccupied hotel serves as a retrenchment camp for a handful of international reporters. Among them is Frenchman Paul Marchand, who provides content for European and Canadian Francophone media, along with Vincent, his photographer, and Boba, a young Serbian who serves as his interpreter. At the wheel of his old white Ford, this lanky cigar-smoking correspondent and his team brave all kinds of dangers in order to be right there when events occur. Outraged by the neutrality of the peacekeepers, the journalist fights against the apathy of the Western world by bluntly condemning the travesty he witnesses.