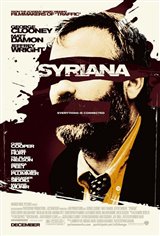 As a career CIA operative (George Clooney) begins to uncover the disturbing truth about the work he has devoted his life to, an up-and-coming oil broker (Matt Damon) faces an unimaginable family tragedy and finds redemption in his partnership with an idealistic Gulf prince (Alexander Siddig). A corporate lawyer (Jeffrey Wright) faces a moral dilemma as he finesses the questionable merger of two powerful U.S. oil companies, while across the globe, a disenfranchised Pakistani teenager (Mazhar Munir) falls prey to the recruiting efforts of a charismatic cleric. Each plays their small part in the vast and complex system that powers the industry, unaware of the explosive impact their lives will have upon the world.